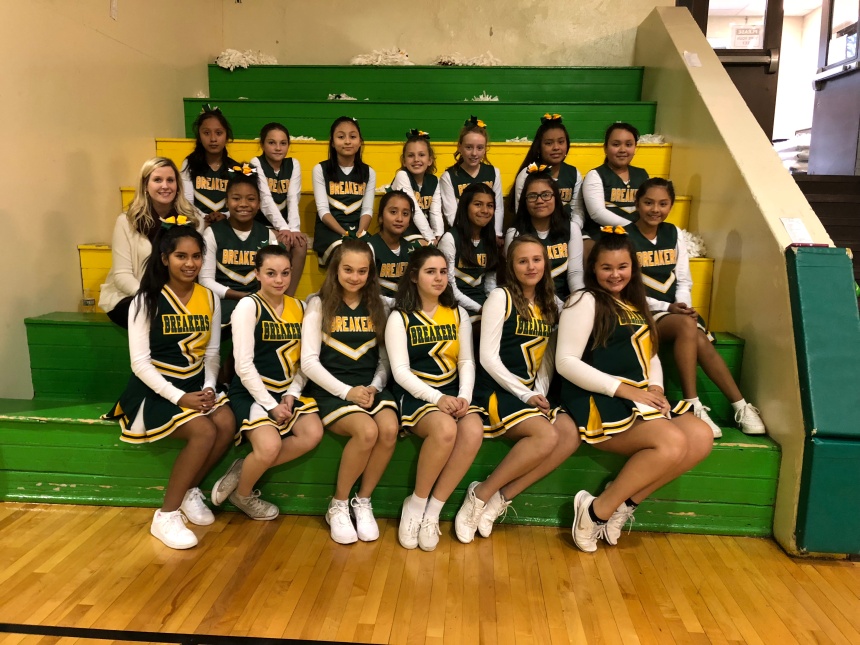 This year’s cheerleading team is the biggest team in five years, consisting of 19 students, with five captains!

The team is doing an outstanding job of spreading the school spirit. They were invited to the Monmouth County Athletic League’s exhibition at Manasquan High School for the fifth consecutive year on February 27.

With a big team comes great cheers,  and even a new one: “The Welcome Cheer” is a new cheer revamped to make it more relevant, said Mrs. Alisyn Morder, the cheerleading coach.

All of these cheers make the team sound amazing, but they also look amazing — sporting the school colors, green and gold. Ava O’Neill’s mother, Gina, bought special bows for team captains to show even more spirit.

Eighth grader Gabi Moore, who was named one of the captains this year, said she enjoys the responsibility. “You get to help the girls more than you did last year as a cheerleader. It’s exciting to see how they started out shy, and they have grown up to be people who could become captains when we (eighth graders) leave.”

Eighth grader Alex Kaufman is the team manager this year, stepping in to help Mrs. Morder after the coach’s shoulder injury.

For the first time this year, the team was opened up to boys. There were no takers, but Mrs. Morder hopes some boys will join next year.

The highlight of the year so far was watching the girls’ basketball team win their first game in four years, Mrs. Morder said. “They were so excited, they were jumping off the bleachers.”

Good luck to the cheerleaders and thanks for bringing the spirit!

Enter your email below if you would like to receive an email whenever a new article is posted.