Bradley Beach girls soccer has come to a close with three wins and eight losses this season. Ms. Maclearie and Ms. Hammell were coaches again this year, motivating the girls to work hard and do their best, even if their best is not always winning. There were 15 players on the team.

In eighth grade we had Alex, Audra, Evelyn, Keyli, and Roselyn. In seventh grade we had Celian, Claire, Ella, Genesis, Jackie, Nora, and Sharon. In sixth grade we had Leslie, Mairelys, and Nora. We didn’t have any fifth graders this year.

Practices were after school at the rec and we had 12 games scheduled for this season. Ms. Maclearie stated that in practice the girls were “working on passing and staying in our position and spreading the field.” These skills will help the girls look like a real team out on the field.  They will be able to connect passes, transition from defence to offence, and cover for each other in different situations.

We played Avon, Sea Girt, Belmar, Deal, Lavalette, and Bay Head.  The home games were at Sunshine Park in Neptune. 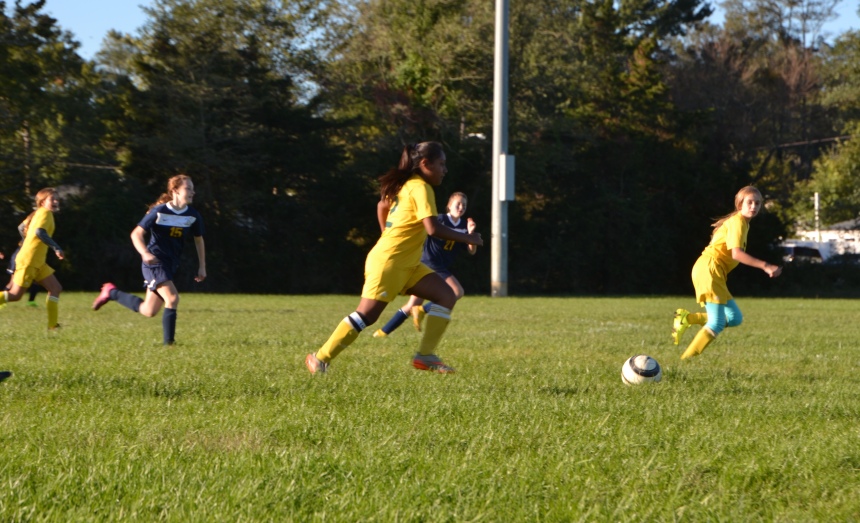 The girls did lots of physical conditioning and getting into shape for the tough games that were ahead of them.  They did shuttle runs(sprints), sit ups and wall sits. The girls lost their first two games, fought hard to win the third game against the talented Lavalette team, and really worked together as a team to keep Belmar at a 1-0 lead.  This was a really memorable game because Belmar was undefeated and they scored near the end of the second half. The girls got the ball up the field a number of times not letting Belmar get another goal and not giving up. Out on the field they showed their determination and their desire to succeed.  The second Avon game was a very physical match and our girls lost 3-1. The girls lost against Sea Girt and Bay Head, but won against Deal 6-1. There were some great goals scored and some amazing opportunities created. We lost against Belmar and Bay Head, but Keyli scored a beautiful goal giving us double wins against Lavalette.

If you want to get to know the graduating eighth graders keep on reading!

*Audra’s favorite memory of BEES soccer was from 5th grade when a ball was kicked right into her face?  Luckily for the team, she didn’t quit right then and there. Audra stops a ton of great shots on goal and we couldn’t do it without her.  Audra directs the team and keeps everyone in the right positions.

Roselyn has only been playing soccer for two years and she’s one of our starting forwards?  She fights for every ball and never gives up. She even scored a great goal against Deal last year.  We’re all hoping she’ll do it again on October 19th.

Evelyn only joined the team to try something new, and she has become a great defensive player?  She enjoys learning life lessons that soccer has to offer. These lessons include perseverance, teamwork, and determination.

Keyli plays all three sports in school, but soccer is her favorite.  She runs up and down the field and fights for every loose ball. She is always working as hard as she can, and she out-hustles everyone on the field.

Alex enjoys hanging out with her teammates, on and off the field?  The love of soccer runs in her family and it is one of her passions along with playing softball.  She’s very aggressive and if she continues to work hard she will achieve her goal of scoring this year.