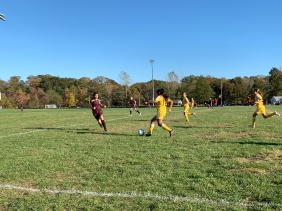 With five wins and seven losses, it was a great season for the girls’ soccer team under coaches Morgan Maclearie and Courtney Hammell. One highlight of the season came in a game against HW Mountz (the undefeated team) in our league. It was 3-2 and it was a tough game as we only lost by one goal. Marielys Ramirez scored one goal and Ella Minsky came with the second goal!

“It’s going to be a huge loss next year without our eighth-graders,” said Miss Maclearie. “Most have played for us since fifth grade! The younger players have some big shoes to fill once they graduate.”

In seventh grade were Marielys Ramirez, Emely Herrera, Kimberly Jimenez, Leslie Vazquez, and Amelia Maffet. Our fifth-grader was Aubrey Maher. This year we didn’t have sixth-graders on our team.

Miss Maclearie gave a lot of credit to the eighth-grade girls.

“Celian is such a strong goalie,” she said. “She had an incredible season and really helped our team stay competitive during some really tough games.

Another highlight of the season was the last game against Avon The girls were on it as they won their last game. They worked hard during practice and they went out on the field killing it. The girls communicated well on the field as they worked together.

At the end of the season, the boys and girls soccer teams had an end-of-year scrimmage and a celebration, a new tradition.