Everyone has heard Fortnite. It is everywhere — on the computer, in stores, and even on TV. But did you know there is a new game that is growing every day? Some say it may dethrone the recent game king, Fortnite. END_OF_DOCUMENT_TOKEN_TO_BE_REPLACED

Posted on December 12, 2018 by bbesthetides 2 comments

After a year-long hiatus filled with cryptic messages for their fans to decipher, Twenty-One Pilots came back with a new album Trench, released on October 5. The fan base went berserk when the artists got back from their hiatus, expecting new music. The album consists of 14 songs: “Jumpsuit,” “Levitate,” “Morph,” “My Blood,” “Chlorine,” “Smithereens,” “Neon Gravestones,” “The Hype,” “Nico and the Niners,” “Cut My Lip,” “Bandito,” “Pet Cheetah,” “Legend,” and “Leave the City.”

END_OF_DOCUMENT_TOKEN_TO_BE_REPLACED

“What if we’re on the wrong side Connor? What if we’re fighting against people who just wanna be free?” – Hank Anderson talking to his android partner, Connor.

Detroit: Become Human is a PS4 exclusive story game that mainly takes place in Detroit, Michigan, during the year 2038. Its main pitch is that it’s a game where your choices REALLY matter. The premise of the game is that androids (advanced, human-like robots) start to develop feelings and emotions, which could be because most of the humans in the game treat them unfairly because of who they are. END_OF_DOCUMENT_TOKEN_TO_BE_REPLACED

If you are wondering where the Bradley Beach Public Library got the idea to buy all these great new manga titles, well you can thank our own Kyel Guerrero of 7S. Back in February, Karin Finnegan, the library’s director of children’s services, asked Mrs. Sucato for a list of manga titles that she would recommend for middle schoolers. So Mrs. Sucato asked Kyel, an avid reader, manga fan, and library member, to put together a list. “He is my go-to guy this year for talking about manga. He knows a lot!” Mrs. Sucato said. Mrs. Finnegan bought all the titles on the list, and they became the foundation of the library’s growing manga and graphic novels collection. Thanks, Kyel!

Bradley Beach eighth graders donated 50 copies of their book My Reality: Graphic Narratives by the Bradley Beach Elementary School Class of 2018 to the Community Affairs and Resource Center, Asbury Park, on April 12.

END_OF_DOCUMENT_TOKEN_TO_BE_REPLACED 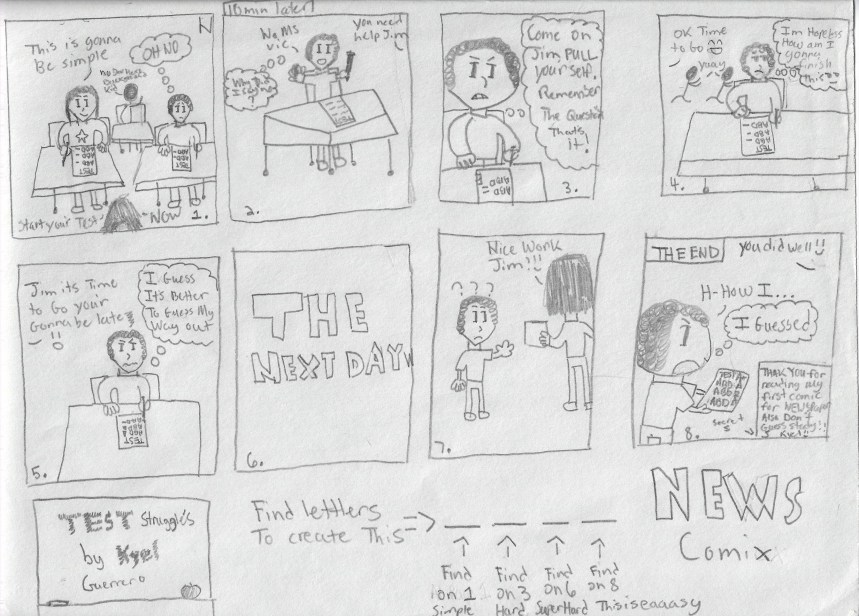 A comic by Kyel Guerrero

Top Picks: “Beauty and The Beast” and “Fuller House”

Beauty and the Beast: a classic tale where the moral of don’t judge a book by its cover comes into play. Belle is a bright young women who is taken prisoner by a beast. She finds that the castle is bewitched and almost every item is enchanted. Despite her worries, she befriends the mysterious staff. Through friendship, Belle learns to look beyond the Beast’s exterior and discovers the kind heart, and the caring soul of the true prince within.

The new action film version of the classic Disney story, starring Emma Watson, and Dan Stevens, brings the romance. the fear, and the magic to life. The movie was directed by Bill Condon, and was released on the 17th of May. It made its appearance on Netflix on September 19th of 2017. END_OF_DOCUMENT_TOKEN_TO_BE_REPLACED